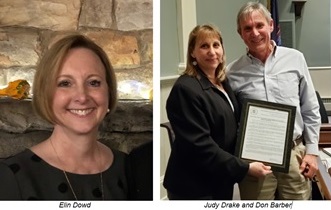 The Greater Tompkins County Municipal Health Insurance Consortium Board of Directors has appointed Elin Dowd as its first full-time Executive Director.  Ms. Dowd will join the management team of the Consortium as its Chief Executive Officer as of April 15th.

Elin Dowd most recently served in the Tompkins County Department of Human Resources, first as a consultant, then as HR Program Administrator.  Elin’s career includes positions of leadership in for-profit, non-profit, and public sectors.  In addition to focusing on strategic planning and process improvement, Elin has worked for third party benefit administrators, managed large health care self-funded plans, and assisted in the administration of benefits for Tompkins County.

“I am excited to be joining a team of innovative thinkers who are committed to a mission of providing affordable health care to the employees of municipalities in Tompkins County and the surrounding area,” incoming Executive Director Dowd said.

Prior to relocating to Upstate New York in 2017, Elin worked as Executive Director of The Learning Centers at Fairplex in California, and had a seat on the Los Angeles County Fair Association’s management team.  She was a strategic advisor for Zhejiang Senhe Seed Co., LTD, assisting Senhe’s chairman with expanding their Chinese based floriculture company in North America; and also served Monrovia Growers for 15 years, promoted to President in December of 2006 from her role as Vice President of Human Resources and Learning.

Elin received her Bachelor of Arts degree in Psychology from Drew University, and her Master’s of Science in Human Resource Design from Claremont Graduate University.  Elin and her family live in Watkins Glen, NY, and are sole proprietors of the Idlwilde Inn.

At its March 28th meeting, the Consortium Board of Directors, by unanimous vote, passed a Resolution of Recognition of founding leader Donald Barber, expressing “its sincere appreciation, admiration, and gratitude” for his distinguished and dedicated service to the Greater Tompkins County Municipal Health Insurance Consortium.

As leader of the Tompkins County Council of Governments which in 2007 first brought forward the Consortium concept, Don was instrumental in securing a New York State Shared Services Municipal Incentive grant to research how to provide quality and affordable self-funded health insurance to municipal employees and their families.  He then worked tirelessly over two years to achieve a New York State Certificate of Authority for the Consortium in October 2010, to begin operations as of January 2011.  Don initially was elected Chair of the new Board of Directors, then, as of July 2014, was appointed as the Consortium’s first Executive Director.

Don has been instrumental in designing, developing, and growing the Consortium from the initial 13 members covering 2,000 municipal employees to an organization of 39 members with more than 5,000 covered lives.  The resolution states:  “With Don’s dedication and devotion to the Consortium, it has become a well-recognized leader in municipal health insurance across the State of New York…The Consortium has greatly benefited from Don’s vast knowledge and experience with governmental agencies, his skilled stewardship of the mission of the Consortium, the goodwill he generated with the members and their employees through his thoughtful interactions, and his tireless devotion and desire to proudly serve our organization in order to make it a renowned intermunicipal cooperative.”

“I am so proud of what we have accomplished together and the statewide recognition we have received,” retiring Executive Director Barber told the Consortium Board .  “I am honored that you allowed me to be the face for the Consortium.  Your success is both a source of pride and a challenge, as you enter uncharted territory with the rapidly growing size of our Consortium.  I have every confidence that Elin is a great choice to partner with you to continue your success and face the challenges ahead,” he said.

“The Consortium appreciates the leadership, time and dedication that Don Barber has provided for over the past decade,” said Judith (Judy) Drake, Chair of the Consortium Board of Directors.   “He provided the drive it took to make sure the Consortium got started against all odds.  Don’s ability to drive the mission of the Consortium is why it is the amazing intermunicipal organization it is today.

“As Don transitions to retirement, we move to the next step of this journey.   I am excited to welcome Elin Dowd as our new Executive Director.   With Don as a role model and Elin’s drive to move the mission forward, the Consortium will continue to be an excellent example of successful shared services,” Drake said.

The Greater Tompkins County Municipal Health Insurance Consortium was formed under Article 47 of NYS Insurance Law, the only pathway for small employers to participate in self-funded, self-insured risk pools, which have much lower premiums.  The Consortium is currently the only Article 47 entity authorized in New York State as a cooperative of towns, villages, cities, and counties.